Murder runs rampant again in Texas in THE TOY BOX, a new feature from director/cinematographer Michael Colburn, who gave us some info on the soon-to-lens feature. Based on an original screenplay by Kristin Wong that was adapted by Jennifer Peebles, the movie is based on the true case of serial killer David Parker Ray, who is suspected of slaying as many as 60 victims, whom he tortured in the homemade chamber of the title. 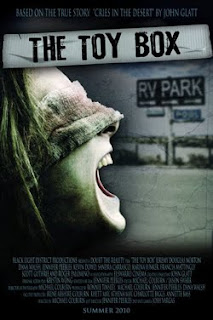 “This is by all means a horror-oriented film,” Colburn tells us. “However, as part of making this film ‘based on a true story,’ we’re filming it from a different perspective, more of the victims’ viewpoint. I was fortunate enough to sign a contract with John Glatt, the author of CRIES IN THE DESERT, a book about David Parker Ray, to give my film its authenticity. My ambitions for THE TOY BOX are to explore true-life, real evil and bring awareness to the public that, just because a killer like this slipped up and got caught, it doesn’t mean there isn’t someone else out there who is still getting away with it.”

Peebles is also part of the film’s cast, which includes  “several people who I’m really looking forward to working with: Jeremy Norton, Dana Walsh, Bianca Barnett from ALBINO FARM, Julin Jean of SPIRIT CAMP and SWEATSHOP, Jessica Flores and Kevin Dowd,” Colburn continues. “I’ve also hired on Kristi Boul [another SWEATSHOP alumnus] and her makeup team from Rancid House FX, which I was amazed by!” THE TOY BOX is set to roll later this year in and around Houston; check out the official website of production company The Black Light District here.
Posted by FANGORIA Magazine Editors at 12:24 PM