By Michael Gingold
Dark Sky Films and Glass Eye Pix have announced that their latest production HYPOTHERMIA has begun shooting, with HENRY: PORTRAIT OF A SERIAL KILLER’s Michael Rooker in the lead. The movie is written and directed by James Felix McKenney, whose previous films include AUTOMATONS and the upcoming SATAN HATES YOU.

Set in Maine, the movie is about a couple whose annual ice-fishing trip at Lake Noyade is upset by the fact that no fish are biting. They, along with a father and son also staying by the lake, discover that a strange creature is responsible for the fish’s disappearance and is now hungry for humans. The cast also includes THE GIRL NEXT DOOR’s Blanche Baker, Greg Finley, Don Wood, Ben Forster and Amy Chang; stunt and movement performer Asa Liebmann plays the monster inside a suit created by DIARY OF THE DEAD’s Chris Bridges, while Brian Spears, who also worked on the recent Glass Eye productions BITTER FEAST and STAKE LAND, contributes the gore. 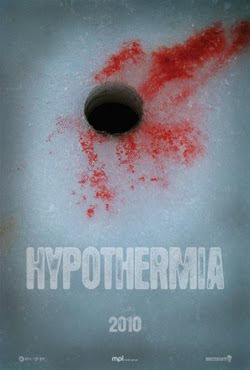 HYPOTHERMIA is produced by Glass Eye’s Larry Fessenden, Peter Phok and Brent Kunkle and Dark Sky’s Derek Curl, in association with Offhollywood Pictures. It’s one of the first screen projects to be shot in 4K with the RED ONE hi-def camera outfitted with the new Mysterium-X sensor. “It is very gratifying to have the support of such a cool company as Dark Sky,” Fessenden says, “so we can keep making these auteur-driven genre films we call Scareflix. Having Michael Rooker headline the cast in a role like this is especially exciting because it is a different side of Rooker we’ll be exploring. I know the fans will be gratified to spend some real screen time with him in this rugged and sympathetic role.” Look for more coverage of HYPOTHERMIA in the near future.
Posted by FANGORIA Magazine Editors at 6:52 AM