Fango got the scoop from Shout! Factory about its updated schedule for the Roger Corman’s Cult Classics line of DVDs and Blu-rays that it’s releasing beginning this summer. Shout! struck a deal earlier this year with Corman to issue more than 50 films he directed or produced, among them a number of highly regarded horror and science fiction films. The fresh sked includes new dates for the discs of 1978’s PIRANHA, 1980’s HUMANOIDS FROM THE DEEP and a double-feature DVD of UP FROM THE DEPTHS and DEMON OF PARADISE.

Here’s the latest lineup of titles to look forward to: 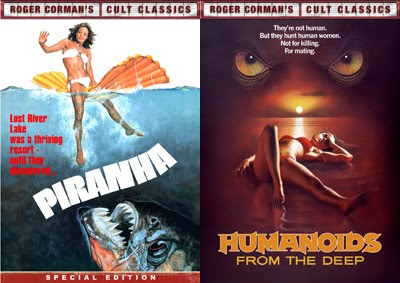 HUMANOIDS FROM THE DEEP DVD

UP FROM THE DEPTHS/DEMON OF PARADISE double-feature DVD

BATTLE BEYOND THE STARS DVD

Although only PIRANHA has been designated as a special edition so far, Shout! is planning plenty of bonus content for many of these titles. Among them are a trio that have yet to be assigned a street date: the SLUMBER PARTY MASSACRE trilogy, for which filmmaker Jason Paul Collum is directing the three-part documentary SLEEPLESS NIGHTS: REVISITING THE SLUMBER PARTY MASSACRES. This feature is being produced by Tony Brown, webmaster of the SLUMBER PARTY/SORORITY HOUSE MASSACRE fansite The Old Hockstatter Place, who will also moderate commentary tracks for all three of the SLUMBER flicks.

Collum, whose credits include OCTOBER MOON, its sequel NOVEMBER SON and the horror-starlet docu SOMETHING TO SCREAM ABOUT, tells Fango that SLEEPLESS NIGHTS (a reference to the first SLUMBER’s original title) will be a jam-packed affair. “It will feature all-new interviews with cast, crew and FX personnel from the series,” he says, “vintage never-before-seen interviews and behind-the-scenes footage and photographs, visits to the original shooting locations and commentary on the plethora of SLUMBER knockoffs that followed—including THE LAST SLUMBER PARTY, SORORITY HOUSE MASSACRE and our personal favorite, THE SORORITY HOUSE SLUMBER PARTY MASSACRE.

“This project brings me full circle in my connection to the SLUMBER PARTY MASSACRE franchise,” continues Collum, who will also write the liner notes. “In November 1999 I sold my very first piece of journalism, an extensive retrospective about the series for Femme Fatales magazine. Over the next several years, I tried unsuccessfully to sell variations of a SLUMBER PARTY MASSACRE IV spec script to [Corman’s] Concorde Pictures, but I did cover the films in SOMETHING TO SCREAM ABOUT and my book ASSAULT OF THE KILLER B’s. I was contacted by Shout! Factory’s Cliff Macmillan last November because he remembered SOMETHING TO SCREAM ABOUT and knew of the book and the Femme Fatales story; he made the offer, and I jumped all over it. I’ve been a massive SLUMBER fanatic since I sought out the original film, trying to discover who Brinke Stevens was because I kept reading about her in FANGORIA as a teenager. This is a very exciting project for me, and I truly hope I give the fans everything they want to know and see.”

In addition, Collum reveals that those devotees will be able to take part in the fun, thanks to a contest to be hosted at The Old Hockstatter Place. SLUMBER maniacs are being invited to submit videos (up to five minutes long) demonstrating what makes them “the ultimate fan” of the series, with the winners being included alongside the other extras. Go to the Hockstatter site for more details and to download a release forms. And stay tuned for updates on Shout’s Corman discs.
Posted by FANGORIA Magazine Editors at 9:51 AM